Home > Nannies in the UK > Identifying What Nannies Don't Like 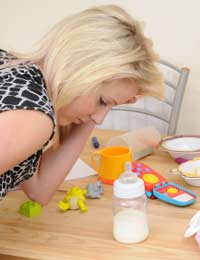 There are things about every job which we don’t like – that’s just life. But if you are looking for a nanny, and don’t want to drive her away within the first six months, then it’s worth noting the things which commonly put them off the job. So read on and find out what it is that nannies don’t like!

Of course it’s obvious that no-one likes to be overworked. So what do we mean by this? Well, most nannies average a 10-hour day - rather than a standard 8 hours like the rest of us - so to ask nannies to regularly up these hours to 12 or even 14, means that you’re going to end up with a wrung-out, stressed-out, fed-up nanny. Being asked to do additional hours on a regular basis is a number one reason why nannies walk out.

Another huge issue for nannies is being under paid for the work they do. For most qualified nannies, as with any profession, they hope and expect to get justly rewarded for performing well in their chosen career. Having gained qualifications and experience, they wish to see this reflected in the salary they are offered rather than be offered an hourly sum based on the National Minimum Wage.

A similar bugbear for professional nannies is being treated as somehow inferior or – worse – a ‘servant’ of the family. Nannies train in all aspects of childcare and deem themselves professionals, just as do many of the parents in their sphere of work. Nannies are also hired by families to work in place of the mother, caring for the children while she is not able to do so herself. Nannies therefore expect to be treated with respect and as helping carry out the most important job any parent will do – that of raising and caring for their children. When nannies are disrespected, they feel de-valued and de-humanised. If you are in danger of thinking of your nanny as merely a ‘hired hand’, she will not stay.

Remember - a little appreciation goes a long way! Much of the nannying role consists of doing extremely repetitive and exhausting work such as cleaning, tidying, cooking, clearing, washing, and ironing. Such work can go unnoticed and unappreciated – so aim to treat your nanny as you yourself would like to be treated and remember to say thank you once in a while.

Even if your nanny is not being overworked, under paid, or under valued, do you undermine them? This, again, is something that greatly upsets most nannies.

When you employ your nanny, you give her the task of having sole charge of your children during the hours you need, of setting boundaries, and of applying previously agreed sanctions if those limits are crossed. It is therefore devastating to her – both professionally and personally, to have the parent ruin her hard work and undermine her authority with one thoughtless comment.

A common example might be that the parent asks the nanny to make sure that little Johnny has no chocolate biscuits that day – so nanny sticks to what Mummy has said and explains this to the child. If this is then flouted the moment Mum comes home from work by her relenting on her rule then all the good work by the nanny is undone and can also present an ‘us’ vs ‘them' situation between the parents and the nanny in the child’s mind. They need to know that Nanny and Mummy are in alignment at all times and if any difference of opinion needs to be discussed, it should never be done within earshot of the kids.

The general undermining of the nanny, then, causes, tension, and resentment so avoid it at all costs.

Being asked to Babysit

It might seem just a little thing, but as is often the way, it’s often the last little straw that breaks the camel’s back. Families may think that having the children’s nanny to babysit is the most logical thing in the world. They pay her, they trust her, she knows the children and the children (hopefully) adore her – so what’s the problem? The problem is unfortunately a common one – and that’s that nannies often feel that the family doesn’t realise or appreciate that she has a life of her own. How many of us go to work each day for 10 hours and then get asked to return a couple of times a week in the evenings? Well, nanny’s don’t like it much either. While once in a while, they may be more than happy to help the family out with ‘overtime’, if the requests for extra babysitting or to stay over-night get too much, then the nanny will start looking for a less demanding job!